Hi all.  I just completed a 3 day 2300 mile drive from Indiana to California with my 2 cats:)  The first day went very well but the second day was a nightmare.  I drove from Tulsa to Albuquerque and ran into a severe thunderstorm with lightening and tornado warnings outside of Tulsa then extremely high winds across Texas and New Mexico that turned into blowing sleet and snow with gusts up to 80mph!  I was terrified the entire day and, of course, really missed having my husband with me.  He…

going out with friends

It has been 4 1/2 months since my husband Ray died but 16 months since he lived here.   Yesterday I took down two pictures in my lounge room and replaced them with two others, today I am going out to buy some new curtains and throws so I can make some color scheme changes.  It is part of my effort to renew some of the things in my life so it is not too familiar.  I think I need to do this.

I have been going out with friends, mostly other widows to lunch mostly in the local sporting…

Here I am one year later.  In some ways still in disbelief that I live alone.  It's been one year and I still have his boots next to the door.  I still don't put the toilet paper on the roll (that used to drive him crazy so I did it to annoy him).  The dump sticker is on my windshield and I've become a regular at the dump and the recycling bin.  No snow or ice build up in the gutters, the bird feeders are full most of the time.  I guess I'm adjusting to the routine.  It is just so damn…

I will take my day "Sunny Side Up" please.

Three months ago today my husband took the wings that he had definitely earned and joined his loved ones in heaven.  On this day I got my own special guardian angel.  It was the hardest day of my life and the past 3 months haven’t been easy.  I am slowly learning to cope with things and look at the brighter side of things.  When things go wrong, and it seems to happen to me a lot lately, I have to laugh it off.  It’s either laugh or cry, and laughing feels much better!

Today I took my son to therapy and ultimately to school. When we park in the lot the place where we cross to enter the school is flanked by bricks. Commemorative bricks. And we have 2 in there for Jason. Since he was already late we took our time and found the "daddy bricks" again.

I posted the pictures…

I Still Cry For You

When I wake in the morning

and when I go to bed.

When I see you in our sons eyes,

My heart aches for you,

and wishes you were here.

As I spend another day in time… 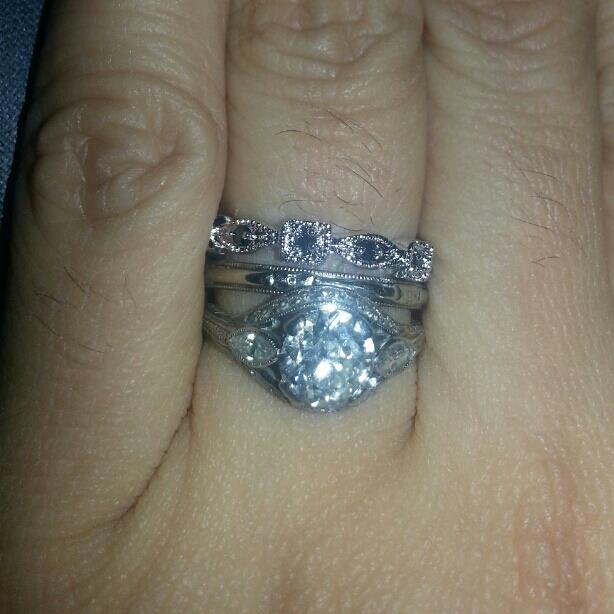 One picture of three rings. They may only be rings to some but to me they tell a story.

The first ring signified a promise of marriage, a beautiful ring handed down generations--given to me by my John that November 2003 night.

My whole world changed on January 8,2013. That day the love of my life left this world. He went so suddenly and unexpectedly that I hardly knew what had happened. Jim and I were married almost 20 years and together for 25. I thought that was such a long time. People say things like you have your memories, but to be honest, right now all I remember is that night, that horrible night when everything I knew as normal was no longer normal. Now the days are long the nights are longer. Theres…

Being Faithful, Dependable and True

I am not perfect but I have humbly lived my life trying to be a faithful child, a faithful brother, a faithful friend, a faithful companion and faithful parent. I am human; therefore, I seek these same qualities in others in my life. I seek to have God’s presences, guidance and directions in my life daily as I thank him for the lessons he has shown me and the gift of allowing me a new day.  I do not seek the recognition of being wise in my words or glory for things I have accomplished in…

So Dan and I were never great about budgeting or managing money particularly well. In some ways, he was better than me, but it was always my intention to be more organized and diligent. Now that it's just me, I have no choice; I HAVE to get my act together. Can anyone recommend an ap or program that they use? I'm looking for something flexible. Ideally it would be online, like on a server or cloud so I could access it anywhere.

“It was good, really, that this external world still existed, if only as a place of refuge.”
― Patrick Suskind…

Today is Kevin's 59th birthday and I am feeling every bit as alone as I did  when he died 5 years ago. I know that my recent  extra sadness is exacerbated by the approaching day, but I thought it would be better,  at least a little bit by now. I guess I should be grateful that I now know it won't kill me to get through another milestone without him. The  bone aching sadness is still very real and I wonder if there;s something wrong with me. My  brother told me it's time for me to find…

I may not always understand, but God has my best interest at heart. I look back at all the times I’ve prayed and prayed for something. Some times his answer was yes, occasionally his answer was no and a few prayers remain yet unanswered.

God knows what lies ahead of me. God has guided me toward certain decisions and warned me against others, for my benefit. I am prone to push ahead and ignore God’s warning but he has continue to respond yes, no or not yet, but when I trust God with…

What is your measure of pleasure? What does it take to have fun, be happy, or just be content?

Some of my friends know that John Prine is favorite singer/songwriter. I discovered him when the days after Bruce died were scary enough, but the nights were terrifying. Now, Prine is my muse. When I get an idea for a story, or have a thought that I want to share, I wonder how would it sound in a Prine song? I'm finding a lot to write about these days. John has a song called You Got…

Well here I am...its been almost five years now.  The loss has receded, the pain has slipped into a quiet place I created just for it.  I hide it away from everyone and banish it to that quiet time that it demands my attention. Am I any better?  In most things I have to say; Yes I am!  But, I can also say that in those things that were exclusively yours and mine Cathie..NO, I'm not.  I miss all the good times, I miss holding…

I have days when I  have some courage and other days I just want to a "turtle" and pull safely into my shell.  I know I cant stay in this shell forever.

I know he was terminal, and did not leave me because he wished to. I know he tol me he didn't want to die, and also he was so "sorry" for Mess...

the business had been going down hill... part of it was the economy and as hindsight…

There are moments when it all seems unbearable, not real, anger, frustrating, and loneliness but I've was blessed with a devotional book given to me by my late wife's twin sisters church group. Heaven Calling - Hearing Your Father's Voice Every Day of The Year. Reading it and open my heart, mind and soul for his comfort and healing this past year has anchored me in my faith even stronger. …

In trying to get papers organized, finances figured out, stuff like that, has anyone else found out that things were not what you thought they were  (finances, bills, mortgages) and that your love didn't always tell you everything...not that mine was being bad or anything...he just always tried to protect me from things and didnt want me to stress  (?)...did this make any sense?   Sam

You never know when someone you love, or yourself is going to pass away, unless you have to deal with long term illness. Before Joel died I didn't really think about this a lot. Him passing suddenly knocked me off my feet and shook me to my core. Even after 3 years it is crazy trying to wrap my head around the fact that he is gone. Gone from my eyes...but not my heart. Very few people in life actually reach our souls...he was one of them. Life is fleeting...you never know...and really thank God… Continue

A year ago, I didn't take any medication at all, now I have my personal pharmacy.  I have pills I take in the morning, at mid day, and at night.  Due to widow brain, it's difficult to keep track of them so I got a pill container that has seperate compartments for each day of the week.  It's now Sunday morning, which means it's time to refill the weekly container.

I fill all seven compartments, and then retrieve the morning pill.  Why did I put it in the container and then…