In my 7th month, there have been unexpected medical issues for me, and my husband's birthday, and Valentine's Day, and other "hills" and hurdles.  But the bigger life lesson I have learned has been gaining understanding of my adult kids' perspectives.  They are busy with their careers, they live at a distance, and I, of course, wish for more contact.  If nothing more, I call and they always patiently listen.  But listening is not all I need.   I finally had to say that a call implies a…

ASHES to ashes, we all fall down.

It's been a while since I've written a blog or made a post.

I am posting today, because I find my heart in torment (again),...and it's irritating because I've made such positive progress since my husbands passing.

We were together for 2 years, everything was magical, and the world was going to be ours, and it was going to last FOREVER---until that unfathomable day that he was killed by…

Is it normal to feel this way?

I can get through several hours at a time feeling normal but then the reality that Brad is dead will settle in and I feel exhausted and suddenly not able to think straight...

Dearest Denny.....
As we slide into march, I become acutely aware that we approach the anniversary of your transition to your new existence. 12 months ago we tearfully prepared for your anticipated departure. I clung as would a spoiled child to a favorite toy. But you deftly slipped my grasp........and I was left with tears, rage, loneliness and anxiety. Now I know that you had to go.......that a wonderous existence was waiting........you are finally able to explore the universe as it was… Continue

Here I sit waiting for the phone to ring.  After being retired for 16 years.  When I retired, I thought all my wife and I had to do was enjoy the good life.  I retired with what I thought was a large enough IRA.  Then, the stock market dropped, and my IRA along with it, dropped, and never recovered.  The stock market has finally recovered, but my IRA didn't,

The same month my wife passed away, August 2012, my "substantial" I thought IRA ran out and then my…

I had a SUPER day today and I am so grateful for it!

1) I took care of some insurance business, I had been avoiding.

2) I finally made a call to my late husband's co-worker and asked for IT help. My husband was an IT guru and I haven't one clue how this house is connected. He worked from home sometimes too, so his desk area looks like a command center and has layer upon layer of security installed. The BRAIN to everything is in THERE! We have been shedding…

How Does He Do It?

Many of you may have been following my journey during the past nearly seven months since I became a widower and since I joined WV.  All of you are grieving just like me and if you've read my blogs, you may have thought, yeah he can do it, but there is no way I can handle this like he does.  I've always been a very positive person and I've been able to carry on that way even after my wife's death.  However, not everyone is the same - which is good in my opinion - and…

As some of you may have read, the last couple weeks has been a full time for me.  It started with my birthday on Valentine's Day February 14th, then came one of my widow friend's husband's birthdays on February 18th, and finished up with my wife's birthday on February 24th.

Friends and Family move on, me still here alone

When Janis got sick, I was scared but ready to battle the melignancy ( Jan did not wanted to call it cancer ) with her and win. The time at the hospital was busy with friends and family with us all the time, then we came back from the hospital and Janis didn't wanted people in her sancturary (home) but friends and family continue coming, then my baby went to heaven. .. The night that my baby died, her sister and aunt stay with me, the next day after the funeral arrangments were done,…

It's the little thiings

I got a sixty dollar bill from my car insurance. I couldn't figure out why; I thought I had paid the balance, and canceled the policy on the second car when I sold it. Then I looked at he bill. This charge was because I no longer get a  multi-car discount. It's not the money. It's knowing that what once was a duo is now solo.

My husband's brother insisted on having remote start installed in my car, a very nice gesture. I don't have a garage. This way my daughter will always…

I'll tell them, just not yet

Write it down says my counsellor when I try and describe the surreal feeling I've had since Gary's death 7 months ago. I'm trying to describe to him that I feel detached from life, that I'm watching and functioning in the world but from the outside almost like a ghost myself. People have moved on, the sympathy phase is long gone there's definitely an expectation that I should be over it by now from most people. Well I am over it! Over trying to fit what other people think, but I'm not… Continue

I’m really proud of my brand new tattoo. It is my first. I never ever thought I would get one, in fact, I always said I don’t like tattoos on women, especially on… 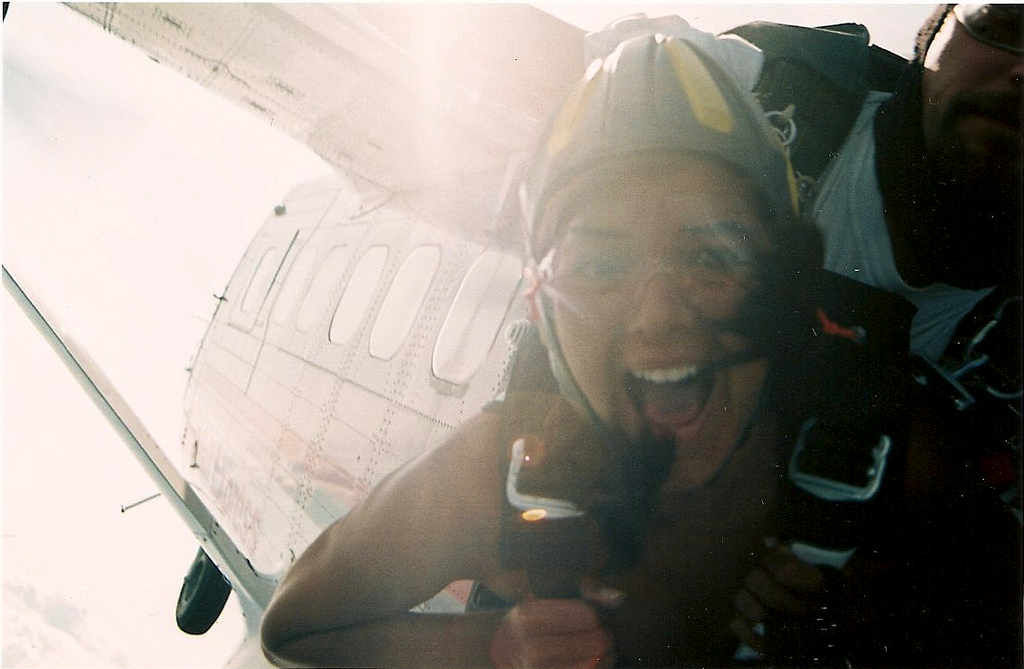 I was 9 1/2 months out and it was the first anniversary of our first kiss/engagement anniversary and I wanted to do something to honor the day. Sergio had gone skydiving a few years before and he loved it so much I put it on my bucket list too. I brought one of my dearest friends who had every reason to live to jump with me- I prayed that if one of the parachutes was going to fail it would be mine. I clung to Sergio's prayer card and took the leap attached to the…

I to will be free.

I still cry and I still ask why, but I try not to doubt my faith.

God is in control he is Alpha and Omega, for he will lead and carry me through, how patience is he.

For I know on October 2, 2010 filled your heart with so much sorrow,God says my child be still and let me feel your sorrow.…

I am 45 and lost my husband Jeff, almost 3 months ago. We were together 21 years and married for 18. His death was very sudden.  He had a pulmonary embolism, in our home, in a horrific scene that will live in our memories forever. He had been at the doctor's the day before, mistakes were made and the result was tragic. Equal to the loss of what we had, is the loss of future. We will never…

Tomorrow is the first anniversary of Jud's death. It doesn't seem possible that a whole year had gone by. It has been the hardest year of my life. I have shed a lot of tears and felt like I have carried a huge lump of sadness in my chest on many days. I also feel that I have been so fortunate to have such a loving group of friends, daughter and son-in-law to be.  Tomorrow night, one of our friends is having a little gathering to eat together and remember Jud. I spent the day finishing my…

On December 17th 2012, I lost my fiancé in a car crash. To make matters worse, a little over a year prior to this, I lost an 18-year-old cousin the same way (head-on collision with a speeding 18-wheeler) and at the same location (same road, just a few kilometers apart, luckily I’ve not become scared of that road, I’m kind of just mad at it at the moment).

Robin and I had been together for more than 8 years and lived together for just as long, since I was 16 and he…

I would like to think that life has been good to me. I had two great parents. Many great childhood memories.

I’ve been fortunate to have many great adventures & opportunities. Fun coincidences. One thing leading to another…

I certainly was blessed to be friends with Cindy for 37 years and to be married to her for 27-1/2 years. We raised two great children together and had a wonderful family life. We always tried to make our decisions based on what was best…

This is my first blog effort.  Maybe not so eloquent as others....

I'm 7th months out from the loss of my husband, but I want to share my first "jolt" that hit my head after he died.  My very first gut reaction was that the strength of widows/widowers is SO profound.  It was an instant mental hit.  They are SO strong.  They must be strong to survive this.  And my mind just reeled with how many I knew or have known over the years.  Those who have walked the walk for many many…

Components of Grief﻿....I bring this to all of you in the hope that with awareness will come your power