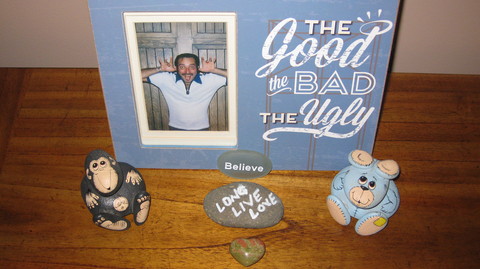 Everyone of us has tried to figure out what we wanted to keep to remember the love we lost. It is a hard decision to say the least and a highly personal one. Some have saved special pieces of clothing and made them into quilts, animals, etc. Whatever works for each and every one of us is what we need to do.

Having an angry day today. Feeling fury.  I yelled in the car after dropping my daughter off at camp and yelled in the house before sitting down to work for the day. I never get to voice my fury and to yell it out was a good idea. I wish I could stand in the street and scream at the top of my lungs and break things, smash things to bits.  I am not ready to dive into work yet so I am writing here to see if I can calm myself down. I feel angry. I feel so angry.  I don't want to feel broken…

Blessed that I was loved.

Love that was as deep as it was fulfilling…

As strong as it was imperfect.

It was my life, my whole world…for a time.…

When Your Bottom Finally Drops

I lost my best friend & husband, Rick, on April 17th of this year to Acute Myeloid Leukemia. We have two boys who are 10 & 12. When this saga began with his illness in March I did my best to keep the status quo going. I went to work, the boys went to school and Rick managed the best he could at home as he was in-between jobs. I didn't know it at the time but he was really sick and resting most of the day. Once he started back to work all he could do was come home and rest. I wanted…

I left my heart in San Francisco

After 2 1/2 years out, I would think that my widow brain would have matured and that the learning and observing patterns would once be restored.  But I have proof that this is not true.  I have been anticipating my participation in all three Camp Widows this year after I attended Camp Toronto this past fall.  I knew this summer I would be in California, my first visit of course, in the presence of my peers for bonding and emotional growth.  I made my air reservations at the beginning of…

Once and again the widow in the room The slow dance

It has been five long years, and boy have they been long. I have worked really really hard to rebuild my shattered life.  Most of the time I am in a pretty good place. I won’t go into everything I have been thru and done, because we are here on this site and we have been there.  The ability to abbreviate my story in this space is one that I have really begun to appreciate.  Going to weddings has got to be one of the worst widow activities next to planning…

Don and I were married for 28 years in February. 4 years ago last May, Don had an aortic root replacement, as he had high blood pressure and an arrhythmia. Anyway, the surgery lasted 9 hours... he was in recovery, and he crashed... twice. The rushed him back and somehow got him to Austin to the major medical center with the help of 2 heart… Continue

Well, it's been the first year already and I just can't hardly believe it!! It still seems like yesterday or that Glenn will walk thru the door any time now. I sat down a week or so ago and wrote down the names of the months and anything the happened in those months. Well, June, he died. July, Aug, and Sept were all blank. Oct only had that I celebrated his birthday on the 26th. On Nov 3rd I celebrated our 30th wedding anniversary. Dec I flew to FL to celebrate Christmas with my folks. Jan,… Continue

I'm just preparing to leave my vacation. I came to Mexico with a widow associate. It was an all inclusive resort but for adults only. My widow associate thought that would be ideal because we wouldn't be bothered with so many children that now flood many vacation hideaways. I dont think I would care either way. I love kids. And I've alWays traveled with them. But they are older now so this year we took separate vacations. I had no idea that an all adult resort would be an all couple resort. So… Continue

This is the first time I have been on any type of site like this.

I am approaching the 2nd year anniversary of my late husband's death, 7-28-13.  I took the first year to mourn, grieve the loss of my spouse, healing from all the pain, hurt of a 34 year marriage to an alcoholic and all that entails.  My healing was miraculous.  Prior to my husband's death, complete, utter, unconditional forgiveness was the gift the Divine gave to me.  Jay and I had no unresolved issues between us. …

How does God choose his Angels

To really understand this blog we must imagine that we live in a virtue world where everyone believes in a higher source for their being and that Our loved ones have transitioned into a place that according to our higher source is a better place. We can examine this by trying to understand what this place has compared to the place they leave. I question why God chose my angel. Why couldn't he just leave him as a mortal being. Just to give a little background. I met my husband when I was a… Continue

Hello I am thinking if going to this event. I wouldn't mind feedback from anyone who has gone. And I'd like to know if there are any other Toronto people here?

I knew the 4th of July would be a hard one to get through but I didn't know it would feel like this.  The 4th of July was my husbands favorite holiday.   He was like a little kid, setting off his fireworks.  Not to mention how he enjoyed BBQing all the food for everyone.  I decided that we would have one more big 4th of July in honer of him (he passed away February 13th, 2015).  We bought the night works that he always loved to light up, BBQed hamburgers and hot dogs, and invited all the…

Today would have been his 75th birthday

This is my first blog post here.  I was going to write on my own blog -- I'm a pet blogger -- but I think this is a safer place, for now.

My late non-husband (we were not married, but were together 30 years lol) would have been 75 today.  He was born on the exact same day as Ringo Starr, and had the same energy and young looks.  We were 20 years apart in age, and now I have the opportunity to catch up to him, I guess.

I just got back from running to the…

new arrival...wish I didnt have to but glad i found this

hello to you all i am glad i found you. I never thought I'd be a widow til i was much older. but here it is, age 58. I think I am doing ok on the outside. (insides another matter).  I have to say I felt like writing yesterday - when my sister said she was seeking counselling because SHE's lost 3 close family members (our mother, our brother and her brother in law, ie my Husband).. I felt like, thats wrong, to tell me about your pain I am so not ready to be empathetic. if its a contest, I…

I'm having an especially hard day today and I'm not sure why. Tuesday's are usually my "bad" day since Philip passed on a Tuesday. Every Tuesday since then, I get up in the morning and have no motivation, am impatient with everyone, and just generally want to be left alone.

But today when trying to book a moving truck for my upcoming move, I just lost it. I just started crying and had a major breakdown. The quote was more expensive than it was two weeks ago and it just sent…