Tomorrow will be one year.  It will begin with a trip to the cemetery by myself.  Then mass with family and close friends.  After that we will celebrate his life by going to the pizza joint that we use to go to after volleyball.  Then we are sending up prayer lanterns to him.  We did the same thing the day after he died and on New Years Eve.  I guess it is a tradition now!  However this time, I am writing a poem on the…

In my dreams I fall apart

In my dreams I fall apart. It is all the hurt and anger I cannot allow myself to feel when I am awake. The dreams are strange but mundane at the same time, filled with moments from the day that just passed or the day to come and filled with my unrestrained anguish.  In my dreams, I cry and I scream and it is messy and uncontrolled and chaotic.

The reason he had me do this was every fall my husband and I would rake up the leaves and then we would basically start a big fire, we have a ton of trees in our yard, and we would always have a beer or two while we kept an…

In all this chaos of longing for my Wes, I have said  I  am not sure I can go on being this stressed and  foggy brained.  Being this  different person and spending  years like this.  So  about 10 days ago  sat and thought about the Widows comments made on this site.  The tentative journey in meeting someone else. And should we do so.  But it is not a comfortable situation.  We still love our beloved .  We are bouncing back and forward in our grief from loss to…

SPEAKING OUT ABOUT WIDOWS ISSUES PUBLICALLY

I was feeling very low today and yesterday evening.  So much to do and missing Wes so much.  I was still prowling round the house at 2.45 am.  So much happening for my widowed friends here and for all of you over in USA and Canada.  Decided I had enough.  I had to speak out.  We are invisible, our needs are not being met. Last week there was a radio program about the wealthy giving money to various projects (like universities)  $65 million. So I rang this…

Ok, I had planned on sharing weekly what I was learning but, like most things time got away from me.

I go every Wednesday and the counselor I see is a nice young man, he is an intern, but I accepted this challenge for myself and I am learning so much about myself and about grief.

At first there were a few things Tom would say that would not sound right and to me it seemed as though he just did not get it, well, of course he did not get it, he has never lost a loved one, like…

Have you found any special items, love letters, cards of your beloved

Have you found some special card, note, or other item from your beloved,  something that made a difference.  That you did not know was there  or had forgotten about and you found it perhaps when clearing out a cupboard?

As I have done some clearing in  my husband's  office there are notes in his filing cabinet, things that were going through  his mind.  These gave insight into what he felt about himself  and what he wanted to do...…

Don't know what is wrong with me, just had a few blue days, no particular reason.

Don't know what is wrong with me, just had a few blue days, no particular reason, just suddenly focussing on the "unworthwhileness" of the single life.  I don't want to burden my kids by constantly calling them, don't want to upset my friends by being less than the upbeat person they see me as, you know "the strong one" BUT I do want to feel as if there is some kind of support there and it is okay to ask for help sometimes.

I try to tell myself that I don't begrudge anyone getting on with their life. I don't think I do. I get it. I wish I could but I can't.

I need to keep off of Facebook. Everyone posting their stupid silly cartoons, celebrating their Birthday's, Anniversaries (those are the worst), their kids sports and grades and silly things they've said. How annoying their husbands are or the silly thing he said. Do you not remember my husband died? Remember a month ago? When you all sent me those…

I have just finished a five-week "intensive outpatient program"-- the only option I had other than an inpatient psychiatric hospitalization. I have learned a tremendous amount about myself and my grief over the past five weeks. I know now that during the first five or six months after Kevin's death, when I thought I was working through the grieving process, I was really in shock, numb, and just surviving. There was so much to do--legally, financially, pragmatically. I got stuff done. But I… Continue

We were watching family videos last night. It was 2009, and I was the videographer.  Wayne and some others were in the living room. We were on vacation.   I was enjoying watching Wayne, and listening to his voice.  I love hearing his voice.

I haven't recovered. It's been 24 hours.  Of course today is 17 months that Wayne is dead. 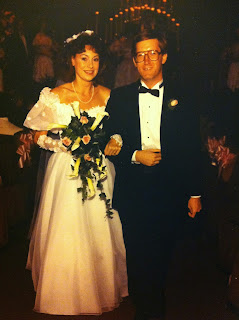 A Letter To My Husband...

Hello!  Quite a bit has happened since you've been gone, so I thought I would just…

Tomorrow will be 3 weeks that my Billy died suddenly at our son's wedding.  Went through the wake two weekends ago, went to our nephew's wedding last weekend, which was very hard for our grown children but they went (they left early but went), got a new grand-son born yesterday.  Today is the burial of the cremated remains or whatever they called this box with what is no longer my husband in it.  It's in my car trunk, I can't even relate to it as part of him, he's gone and not in…

How i didn't die too is a mystery.
Yet here i am, still breathing,
sometimes eating,
paying the electric bill...albeit late.
The dreams we had are defunct.
i nurture new ones,
tiny wooden ships on a sea of uncertainty
which my friends patch with Gorilla Glue when they splinter.
Not free, not easy,
but evidently The Way It's Supposed To Be.
i wake in the morning and You're…

My husband of 22 years was killed 1 month ago 9-13-13 when an impatient truck driver peeled out of a driveway to cross 3 lanes of traffic. My husband was killed instantly.  He had just that morning donated blood for my total hip replacement 10-1. We met when I was 17. We married on our one year anniversary of our first  date. We have a 13 and 17 year old daughters. I'm handicap so I just work perdiem and my occupation is only one to suppliment an income not support a family. Since my husband…

I'm approaching the 5 year sadversary since Kevin died.  I knew that this significant amount of time would probably have a great affect on me.  I also knew that running my Kickstarter campaign to raise funds to publish our love and loss memoir and having it end on that 5 year sadversary would trigger things.  I prepared myself as much as possible by cheering myself on, but I didn't think much beyond that.

Because Today is My Birthday ...

Christina Rossetti (1830 - 1894) was the sister of Pre-Raphaelite Poet Dante Gabriel Rossetti.   I read this poem to Phillip on my birthday every year until this one.

Searching for something for Randy in the catch-all basket that sits on the breakfast bar, I found, among dead batteries and unpaid bills  (the hallmarks of my dyslexic life these last two years): the first cell phone I bought after Rod's death, when mine crapped out and I lost most of his texts...some old photos of his from an ancient trip to Telluride with our friend Travis, which I pulled out…

Hello All.  September and October Blues this Fall.

Many of you know what I mean. And is it me or is Fall unusually beautiful this year ?

As I sit here on the 5 month mark today of losing my wife, I have been reflecting on our 21yrs together. Not one time am I saying my marriage was perfect, but for us it was a perfect match.We got married because we were both ready to settle down and raise a family. We loved each other immensely. I remember our first date, I took her out supper and then we went shopping for baby clothes.over the years we grew so close that we could finish each others sentences, and with just a glance we would…