Quieting Our Inner Critics in the Time of Quarantine.

With the current crazy times, I'm trying to blog a few times a week. Here's my latest (My first in along time) about trying not fall into self-doubt while having more time alone. Take care. http://www.thehungoverwidow.com/our-inner-critics-in-the-time-of-quarantine/.

Memories, Drama and a Master’s Degree

I’m blogging again on my site, the Hungover Widow, after being off for a year and a half. Blogging can be lonely. But I’m back with, “Recovering from Extreme Loneliness or Don’t Trust a Guy with 19 Guitars who Wants to Move in with You.” Its about how I wanted so much to be partnered,…

My Essay is in The NY Times Modern Love Column 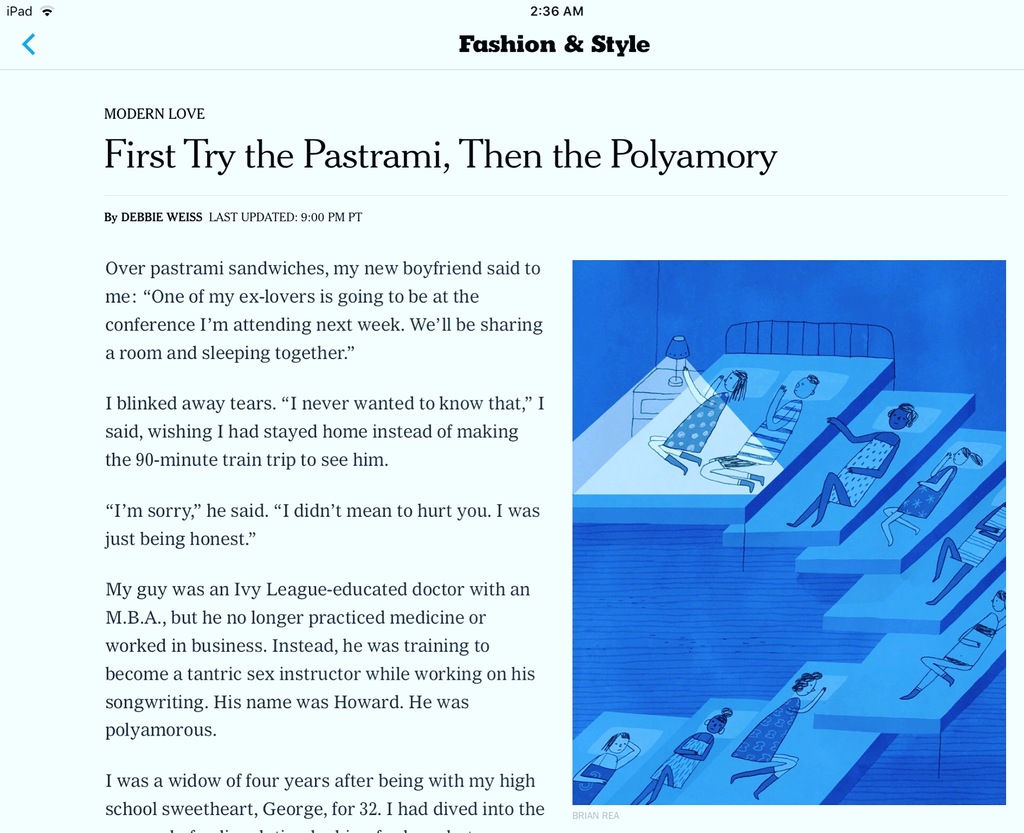 This was one of my dreams, to be in the New York Times’ Modern Love column. What’s weird is the article is online today and in print on Sunday. Saturday would have been my wedding anniversary. Eerie dates. Mixed emotions. It’s a humorous essay, but it’s really about not finding anyone after my George. He was the best. The article is… 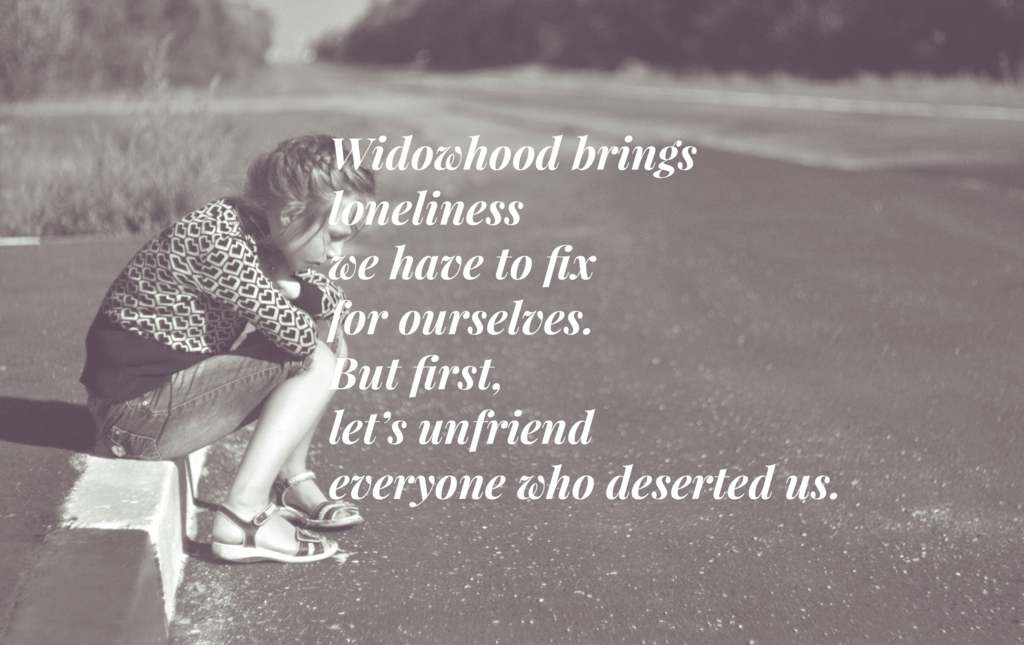 My blog post that’s gotten the biggest response by far was on the loneliness that comes with the second year of widowhood when people just seem to vanish. So, trying to be positive, my latest is about using a beginner’s mind to reach out and make new friends, it starts:…

To help the widowed, let us talk about our marriages.

My holiday piece for the Huffington Post: If you want to help the widowed, let us talk about our marriages. This came out of a dinner where friends were talking about having a good marriage, but seemed to ignore me whenever I chimed in. That’s George and I in 1983. We were together 32 years.…

Hey, first I was excited that my blog, “The Hungover WIdow,” made this list by Feedspot of the top 50 blogs for Widowed People. Here’s the link:https://blog.feedspot.com/widow_blogs/ . I am grateful that folks on this site read my blog.

And I’m still lying in bed because it’s the holidays and I have very little family. Love, Debbie

So, I made it public. Grateful to be in Ravishly magazine warning about the dark side of loneliness: https://ravishly.com/recognize-emotional-abuse.

My big recurring theme, I never thought loneliness could make me so crazy. (I’ve since moved on, reflected and even met someone kind and amazing. (Thanksgiving with his mom—-oy!).

I’m blogging again. This was the hardest post I’ve ever written. It’s about staying in an emotionally abusive relationship because I was so lonely after losing George: http://www.thehungoverwidow.com/tripping-on-the-path-of-widowhood-living-with-emotional-abuse/. Thanks for listening, Debbie

Patton Oswalt: Why does it take a celebrity to talk about widowhood?

Mainly, this: I am grateful that wonderful online magazine Ravishly asked me to do an article on the media reaction to Patton Oswalt's engagement just 15 months after his wife died. It's the first time a magazine has commissioned me to write for them. Same day deadline. Here it is:… Continue

What I Want You to Know about Widowhood on "Ravishly"

I am grateful to have my first article up on "Ravishly," a cool online magazine for women, about the topic closest to my heart: The importance of reaching out to the widowed (even if it feels awkward to talk about death). For me, loneliness was the worst part of being widowed. It almost destroyed me. Here's the link: http://www.ravishly.com/what-i-want-you-know-about-widowhood.

It's funny too. I go through… Continue

My latest article is in the wonderful online publication "Modern Loss." It's a father's day tribute to my dad who raised me after my mom died when I was ten. We became even closer when he helped me see that life could still be worth living after I lost my George in 2013. Here it is if you'd like to read it: http://modernloss.com/father-grief-mentor/ I so appreciate your patience with my posting links instead of actual…

My Latest Blog Post: 5 Questions to Ask Yourself if You're Ready to Date

I'm blogging again. My latest is about plunging back into dating too soon. Here are five questions I wish I'd seriously considered before jumping in: http://www.thehungoverwidow.com/dating-for-widows-and-widowers-5-questions-to-ask-yourself-if-youre-ready-to-date/

My blog is "The Hungover Widow." With apologies for this format, but I'm too lazy to retype.… Continue

A Widow's Galentine to Her Girlfriends

My Valentine to my yoga tribe is in Modern Loss, an online journal about coping with grief. This is the link to the article: A Widow's Galentine to her Girlfriends.  It's about how making women friends really helped me to cope with my loneliness as a widow.  It's a turning point for me because I was a crazy online dater for a while after George died and this is in part how I got healthier about…

Coping with Coming Home to an Empty House

So I went to the Women's March in Walnut Creek, CA. And it was exhilarating. Then to the memorial of a friend's mother. I was so grateful to be doing these things with friends, women in my writers group. Being connected and coping with loneliness have been my biggest challenges. But then it's home to my lovely, but empty, house, leading to my latest blog post here:… Continue

What I Learned My This Year as a Widow

Sorry to post this way, but I have a blog and I'm too lazy to type things twice. April 10, 2016 marked my third year as a widow.I learned a lot this year about making friends, writing and discovering solo travel. Here's my site,http://www.thehungoverwidow.com/.

Widowed over the Holidays

I have a new blogpost on getting through the holidays after loss. I'm shifting my perspective, trying to laugh at the absurdity and feeling a bit of gratitude. It's here: http://www.thehungoverwidow.com/widowed-over-the-holidays/. It's also a paean to my broken dishwasher.

10 Things Not to Say to Widow on RD

I'm in Readers Digest with this article: http://www.rd.com/advice/relationships/never-say-to-widow/. Maybe it'll help with awareness and tactlessness. I write from my own experiences. I'm on vacation without my husband and it's hard to do stuff you always thought you'd do together. When I see older couples in my tour group help eachother over cobbled streets I get a pang.

From Married to Mutant

I've decided we don't always recover from loss, we mutate. I'm trying to mutate into someone who's better with options and uncertainty. When I tried to put that into action on a solo trip to Carmel, I rushed home. I write about it on my blog here: http://www.thehungoverwidow.com/from-married-to-mutant/

Thanks for listening,
Debbie

Relationship Blues and Withdrawing for a bit

I don't post here much because I post ion my own blog, The Hungover Widow.  I'm trying to post weekly.  My latest two posts are about getting into relationships as a widow, Relationship Blues, and about ending the dating/appearance game, Becoming Pudding.  Please stop…

My Loneliness Exposed in Woman's Day

So, a site I write for had a prompt "I am lonely."  I wrote about the loneliness I felt when my husband died and which I still feel sometimes. It's on Woman's Day here:  My Husband was My Best Friend

This was the hardest thing for me to put out there in public. I do wish we were talking more about loneliness. It's sort of the theme of the book I'm writing, but I definitely feel…