This morning while doing my norm, having coffee talking to friends, reading over the FB happenings.  I found my eyes leaking. I wiped away the first few teardrops but they just kept coming.  To my shock, I realized I was crying big silent tears.  Why?  I had to search myself for a reason, I'd like to say I was crying real grief tears because then I'd…

I came across a necklace with this simple sentence, Just one more chapter.  Immediately I thought sheesh isn't it enough to wear your heart on your sleeve, now it's going to hang around your neck.  Of course, widow brain kicks in first, I'm sure it was really meant for book lovers.  It made me stop and think how many times I've probably given thought to words spoken, read or even pictures with "widow brain" and had myself into an uproar over nothing.

Never once have I ever since…

Going into my third year

I'm beginning year 3 on my journey of grief.  As so many of you predicted it has actually gotten softer.  S O F T E R, that was a hard word to understand.  I get it now, or at least I'm beginning to.  I still love my darling Jerry more than anything however I'm also open to sharing my heart with another.  (If another catches my attention and proves he deserves it.)  Finally, when I'm asked how I'm doing I can say, "I'm doing okay." and mean it.

So many changes in the last 3 years. …

Simplifying isn't for the faint of heart but then neither is grief.

So, it's almost been a year, since Jerry left me.  I've come a long long way.  I still have a long way to go!  As I look back at what's helped me the most through this year I realized I have simplified my world.  True, it's a whole lot smaller now but it feels more manageable.

I first let go of friends/people who create havoc, drama, and or negative vibes.  Even though I know they mean well, most of the time certain folks in my life were draining before Jerry died.  Since he's…

I came across this meme today on pintrest and thought it is worth sharing. 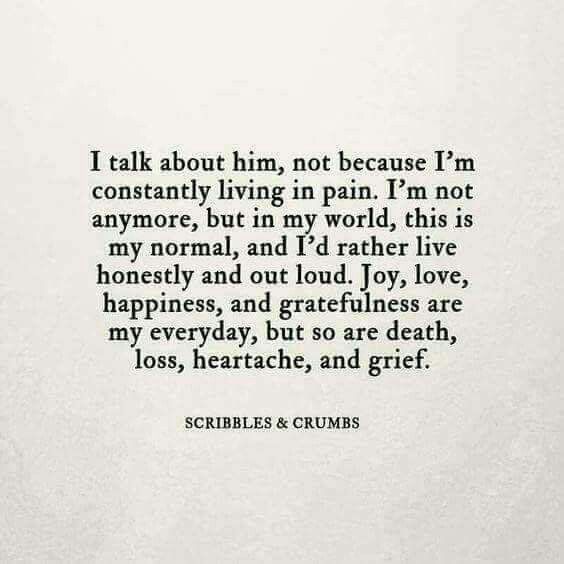 Today is one of those days, I woke up and realized I was alone.  I'm not sure why I was shocked about that, my very first thought was to wonder where Jerry went and why he didn't wake me up.  Then it hit me, these thoughts came in such rapid succession that I scarcely had time to blink.  While I was still sitting on the side of my bed I thought,  great, now I've set the tone for my day and haven't even stepped foot onto the floor.

Hours later, it's rainy and overcast the house is…

The Transmutation of a widow: emotional metamorphosis

I've read many articles, books, and post about grief coming in layers, like that of an onion.  I've read about how grief changes a person.  So, I say to myself okay bring it on.  I imagined the metamorphosis to gently take place like that of a graceful butterfly emerging from its cocoon.  It was a lovely visualization I had, the changes within would come on softly, over time without me even realizing changes were taking place.  I'd wake up one day and be a whole person again.  Looking…

We are called survivors

I've been thinking about the word survivor and why it's what we are called.

Last night I had a very scary medical drama, (I'm fine) but this morning I woke up and thought about it a little bit.  My first thought was, "Well now I've survived my first serious health scare without my sweet Jerry."  I am rocking or maybe I should say wobbling though widdahood.  I've "survived" though a plethora of minor catastrophes, okay so maybe they were just household upheavals but anyway, I…

During a regular old average conversation last week in the chat room, we talked about "happy places".  It was then that I realized, my happy place is gone.  Jerry's arms have always been my refuge, my delight, my happy place.  Since that conversation, I've been feeling small and a little bit lost.  Unsheltered, unrested, and undone!  Perhaps it's because the 6-month mark is approaching.   I'm not sure how, as time seems to be altered to me.  Jerry died, yesterday, last week, last night and 5…

It's been 5 long hard months since the day my sweet, wild, and wonderful Jerry passed away. It's been a real struggle to grow, and keep learning. Sometimes, I pushed myself, sometimes others have pushed me. Then there were the times when I threw in the towel and just had a bad day! Grief is hard work and it's taken me on one helluva ride. (Okay, stop I'd like to get off here.)....

Unfortunately, getting off isn't an option. I loved hard, therefore I grieve hard. I wouldn't change a…

Have you gotten to the point that you can see clearly?  Do you know what you need to do to march beyond the grief into a future that is full of mystery and possibilities, yet be afraid to make a move towards your goal?

I'm at that point, I am so tired of living between worlds.  I'm tired of moods that change as easily as the tide.  However, to me, it seems it takes a whole bunch of courage to move into the great unknown.  I have never had the courage to really put myself out…

I'm a weather forecast and maybe a little bit crazy

It's been awhile since I've had anything to say.  Profound sadness has had me locked up in a choke hold.  I tend to retreat within myself during those times.  Like a clam closing, it's shell.  I'm feeling a little better, okay actually I'm feeling a lot better.  From somewhere in my little clam world the theme from Rocky begin playing on a loop in my head. …

Since Jerry's death, I have heard the whisperings of people who may or may not be well-meaning.  It is a really small town and everyone knows everyone.  So, I expect that I have to hear things I don't like or answer questions when I really don't want too.  Ignorance runs rampant around my town.  Not everyone, most folks are kind or mean well even if they don't cut the mustard.

I am on the fence, should I fight stupid with stupid?  Should I put my mask on and pretend all is…

This is not my norm!

I was chatting with a new member here at the village. She said to me; I hate this new normal. I echoed the sentiment. It's the same sentiment I've said and heard over and over again since, Dec. 14, 2017. I contemplated my new routine. It seems as though I'm in a persistent state of war. It's exhausting.

My heart and mind constantly duel, to the point of both physical and mental exhaustion. Most days I act upbeat; I even fool myself for a moment or two. However, my private war…

This morning, I woke up and the first thing I thought about naturally was Jerry.  He's been the first thing I've thought about for years. Usually, I'd roll over and snuggle; today I stared at our picture.  I wondered what advice he'd give me.  I wondered what was going through his mind two months after he lost his wife.  Jerry was such a confident man.  He nearly always looked on the bright side.  He almost always embraced and adapted to circumstances beyond his control.  I so admired his…

Alone on the Farm

Last night was the first night I've spent alone on the farm.  My kids were here, but they are kids.  My "step-daughter" and her family share 40 acres with me.  They took a weekend trip.  It was eerily quiet and dark out here.  I felt really alone.

It's strange how little things like that make me feel vulnerable and achy.  I ache for Jerry, he was the kind of man that made one feel safe.  I was never afraid when he was here.  There are so many small adjustments to make.  In attitude,…

My child can't catch a break!

As most you know, that chat with me.  My children lost their father Dec1 and stepfather Dec 14 of 2017.   This week their uncle died (fathers brother) unexpectedly.  Last night a school friend was in a car accident and is not going to make it.  Two more friends were seriously injured.  Then I look at FB and see that the step-father of a friend has been killed along with another family member.  Checked the news website and realize they were in the other car.  It seems like it's way too much…

It's very early on with my loss and I realize it takes time.  I also realize I probably will feel single again at some point.  It takes time I know.

I feel very much still part of a loving couple.  Jerry's gone, but I'm not single.  I find it the most unusual feeling I've ever had.  If someone asked me right now, do you have a boyfriend?  My answer would be yes.

Logically, I haven't had enough time.  I just wish I knew a how and a when I'll ever feel like I'm just…

I love a good joke and it was so hard to get one over on Jerry. This time I got him but good without even trying. We headed off late in the afternoon to Georgia for a family reunion five hour's away from home. A little over halfway through the trip Jerry was tired and decided we needed to stop for the night. It was close enough to get up have breakfast and still get to the reunion on time. He get's us all set up at the Hilton Inn for the night. While laying on the bed discussing dinner…