Two weeks ago would have been the time of year Kathy and I would be driving back down from Alberta to Arizona. We were snow birds in reverse. Here in the Valley of the Sun where we lived and I grew up, winters saw almost no change in color among the tree leaves. But driving down the hill............That was where the colors were abundant. Those years were full of color.  Kathy new the change of seasons growing up in a farming community near Calgary. I only knew bloody hot and not so hot. When I met her my world became full of color. Perhaps it was caused by her opening my eyes to things outside my little world. I began to see a world full of color, intense color that came from inside her and crept into my life.

Now you can guess where this is going.  Yes the colors never shine so brightly now. The color I mostly see is black and yet black is a color. I learned that long ago in art class. It is a color just as white is an absence of such.  But black masks all color. It draws us into depth and distance. It hides me in it's shadow.

How far I am from her abundant quiltmaking. Those days spending hours hunting fabric in every quilting store we would come upon in our travels. I became a master of fat quarters picking out eight or more patterns in the same hue and then taking them to her for approval. She always loved them but perhaps that was to please me. I always felt sorry for the ladies who would cut just a quarter yard of each and all those bolts that would pile up. They didn't seem to mind. Those were the days of color, the drawers in her sewing rooms filled to the brim with color. Yes, that was my world filled with color, lots and lots of color.

This is also the time of her favorite yearly quilting adventure. This would be the week of the quilting convention in Houston where Kathy would spend a week in classes and I would join her on the weekend. As the largest annual convention in Houston it was a haday for meeting friends from around the world and having drinks and dinners at days end.Oh how she loved that time. I recall faxing her class schedule request the opening day of registration so she could get the one's she wanted. I would be calling continuously from 5 am till the hotels busy lines would open on the first day of registration some months earlier. That was the hotel attached to the convention center so you wouldn't have to leave the building, an obviously desired spot. Yes we had a quest and even though it took her away for five days, I was happy for her. I would be looking forward to that Friday when I could hop on a plane and join her. That was when the magical romantic weekend began. We toured the city, ate at spots she had discovered with her friends, and of course check out the quilt show. I loved seeing the joy on her face. I loved that she shared it with me.

This is how I came to see color. The way we would photograph every exquisite flower she would see for future quilting projects or every colorful fish in aquariums or mountains we would pass and yes those colored leaves changing on the road home. My world was color because she put it there. She was "Magic".

Now as I return to painting and pick up a brush again after so many years I will use acrylic and then as it does when you mix yellow with black, it will make green, my favorite color. Perhaps I will leave the umbers and oxides in the drawer. I am both excited and scared all at the same time. 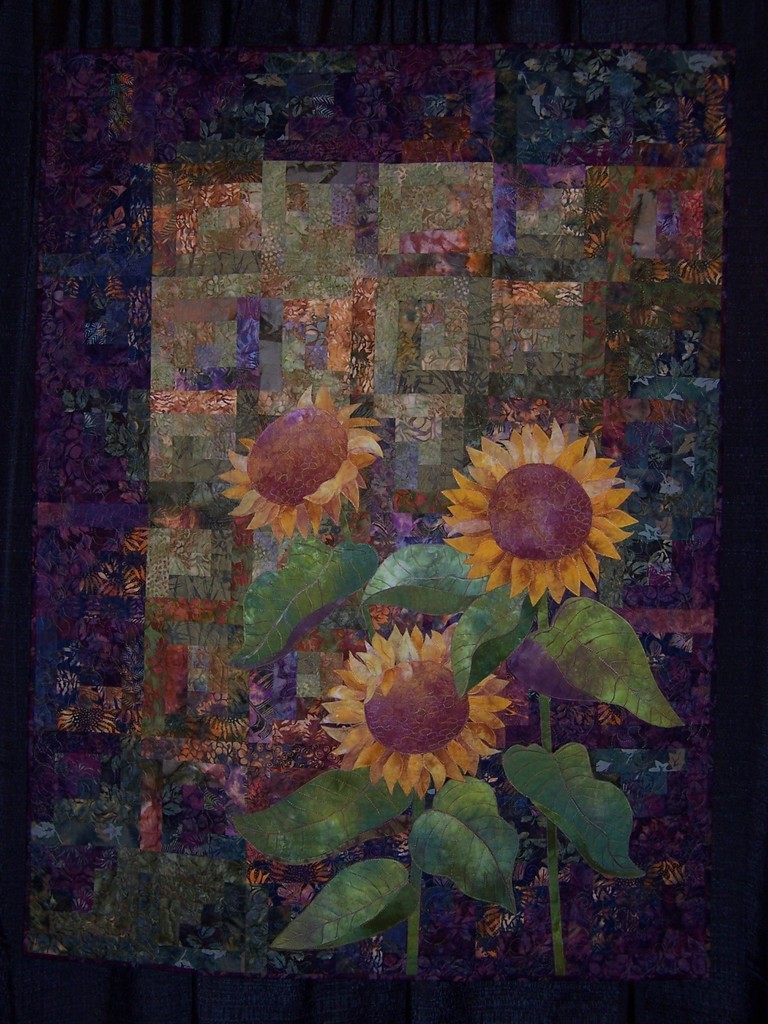 Comment by Kay on November 29, 2015 at 3:01pm
What a beautiful tribute post from you for your Kathy. She was fortunate to have you in her life, indeed bringing your own light and color to her, also. She was blessed to live a beautiful life with you, as you were blessed by her light and love for you. What wonderful memories of a happy life together which still lives on in the vibrant memories. Beautifully written, thank you for sharing.

How lovely! Thank you for sharing that and photo!

Resuming your artwork is a good thing.

Thank you for posting this photo. I found it very relaxing.

Comment by Callie2 on October 28, 2015 at 12:04pm
That quilt is absolutely beautiful, is it one of hers? Never saw one so gorgeous and unique. Glad to hear you resume your art work. It has to be a great outlet. May those bright colors work their way back into your pallet!