I just returned from Camp Widow East and had a fabulous time. The weekend was incredibly moving, extremely heavy, and although many times I caught myself thinking "I don't belong here", I know I came home with valuable tools.  -hence my progression...

I've also recently connected with a new friend, (and he's a boy too)-lol.  Something special about a male companion. It seems as though I'm allowing myself to trust an inner me to guide me through this intense life altering trauma --one that we all get the misfortune in experiencing.  I've been doing fairly well in keeping positive-again celebrating my progression.

but then this frickin' day.

We probably all do it to some degree, and always have.  We celebrate certain dates, because they stick out in our minds.  His birthday, My birthday, our anniversary, and so on.

I don't ever want this day to stick out in my mind. But it does. I don't ever want to have to celebrate it. But I will. Today it hit me really-really hard.  First off, the day before CWE my chihuahua-"Boueffer"(my hubs pup really) got hit by a truck. He died.  My shih tzu is severely depressed.  I've found her in the bathtub, behind the toilet, or just by the side of the road...waiting,...just waiting.  He was her side kick. Her Tonto to his Lone Ranger. She doesn't eat and I'm constantly cleaning out her eyes. She really is a lone ranger now. Everyone is mourning in this house.

Craig's death date definitely hit me hard this month.  I was trying to find the baby carrier so we could all go for a walk together (activity is good, get the blood rushing, endorphin releasing) inner voice screaming at me: REMEMBER FROM CAMP WIDOW-KEEP YOUR BODY MOVING!!--before I found the carrier in the closet, I stumbled across a box that contained all of Craig's hats.  I put each one on my head (one at a time, not one on top of the other...although that would have looked funny!) but I fricking sobbed the whole entire time! Jack just jumping away in his jumper, laughin' and blowin' bubbles out of his mouth, funny boy.  Meisha with her head down, sulking in a separate corner in the house. *sigh*

and this doesn't end??  Who said it gets easier?? even WITH all my progression.

Is it progression? Am I even progressing?

It's so surreal walking up the stairs, carrying OUR son, walking passed his urn! --Oh how I miss his footsteps behind me-- he used to put his hands on my hips-or gently pat my behind as we jogged up the stairs...he always followed me everywhere... lol. Oh how I miss that.

Looking through that box, I found some of his old university science stuff,-a cd "THE BEST WAY TO LEARN THE HARDEST PART OF ANATOMY AND PHYSIOLOGY"

Must have been in first year.  I thought "score! I could brush up on this stuff, it'll help me with my yoga clients!!"  This was starting to get really pathetic! put away this box you jack ass. I finally went on that hike....

It wasn't a complete disaster.  well...maybe that is a lie...but I didn't react negatively while it was happening.  Diezel (nearly weighs as much as me) did very well on his leash UNTIL about 50 meters from home...he sees a rabbit, and goes tearin up grass to get it... I am not about to let him pull me and Jack down... so I had to let go of his leash! Little bugger.

took me about 5 minutes to get him inside!-not bad. thankfully I took us on a 2 hour hike---OR NOT SO THANKFUL?? I guess I didn't dress my baby boy warm enough, and his poor chunky cheeks were purple, his hands were ice cubes.  I put him in a warm bath right after snuggling him tightly... he was happy again.

Meisha and I really needed that walk.  and although it could have gone over a lot smoother, we didn't let it defeat us!

OH goody, I see it coming back....there's that progression again-I guess even on the worst of days its still lurking in the background somewhere.  I really have to listen to that inner voice a little more-she's genius, lol!

love you my chitty love. 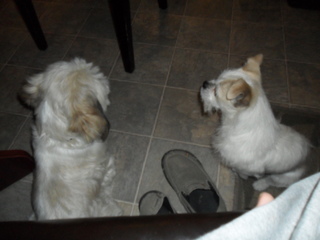 It was great to meet you at CWE! I had no idea you had lost a pet just beforehand.

About this post... I hated that whole "one step forward, two steps back" and every conceivable pattern till I lost count.... AND the sense that "didn't I already learn this bit?" You describe it very well. But I'm glad you were able to keep moving, I do think that's what matters...

(((Stacy))) those darned dates. I try so hard to  ignore it every month, and of course it's impossible. I was on such a high from Camp...filled with hope, actually felt HAPPY again! And today was like a sucker punch, Life standing there smirking, "Psych!!!" Hang in there, girl. You ARE progressing. It's just a sidestep, it's a rogue wave. Ride it out and come out the other side. Love ya!!!!!

Smitty....I am so glad you have found us. Your words are an inspiration to us all. You are progressing, quite well I might add. You will come through this. This is my hope for us all.

I started dating... I know...not something I thought I would ever he ready for. It's odd but I am trying to make it fun. Life is too damn short for no fun. Keep stepping, it gets better eventually. That is if you reach for it. And you are my friend, you are.

Stacy, remember what Michele said during her keynote. We were pushed off the edge of the Grand Canyon and did a free-fall to the bottom. And when we looked up and saw how far we had to climb to get out, we didn't think we could do it. But then we saw others climbing the wall - all at different levels, moving up and then sideways and then down and then up again ... but still climbing, still moving, still making the effort ... that's progress and you're doing it.

And as far as the date goes - I hit 19 months last Sunday on the last day of Camp and while I've made a real effort to not let that date get to me ... it did ... tears on my drive from Myrtle Beach to Charleston ... tears walking through the rain at the Brookgreen Gardens. But that was just the day I need to take some steps backward on that wall in order to get a better foothold so I'm ready to start climbing back up to the top. You'll get there, too.

(((hugs))) So proud of you for getting through finding the box of Craig's hats- and then pulling it together after trying them on! I would be so exhausted and would not be able to see straight, so glad that you knew that  a walk could help. Sweet baby boy probably always feels better when his mommy does something that makes her feel better so no sweating the cold- we all just need to bundle up more...the weather is so weird...I just picked up Luke my 14 year old "still my baby boy" when he got in the car he said FEEL MY HANDS!  his hands were like icecubes ...he was at a Birth-day party for hours and all the kids stayed outside THE ENTIRE time playing in the cold- a hoddie was not enough in this weather for him. He stated he wished he had worn a coat..none of the kids had any coats on either. ((((virtual hug for warmth and support))) hug the kids for me also and let us see the rosey cheeks when you get a chance to post some pics. Luv, ACE