Say his name: the #1 tip, and my reality 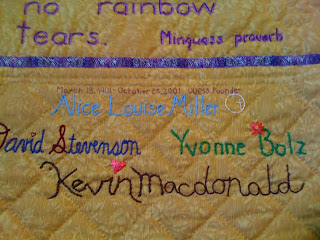 A long time ago, I wrote this post in draft. It didn't get very far.

But the topic is MY NUMBER ONE TIP for how to help a widowed person: SAY THEIR NAME. And it's also why I HATE that everyone ELSE thinks the number one topic on "how to help" is what NOT to say to a widowed person. Everyone publishes the list of what not to say. Because it's good SEO. People WANT advice. Magazine editors think it's "not as depressing" as the actual articles about our lives after loss (WTF?). Even grief counselors and "community leaders" dig into this topic with zeal.

Which SUCKS because it spreads the idea that you should be afraid of saying the wrong thing about a widowed person, when the chief problem of most widowed people after about the first two months is that NO ONE WILL TALK TO THEM.

In general, widowed people feel isolated. Sometimes, they feel they must have leprosy because so many people avoid them. (Don't think we can't tell. For a while we're in a fog, but we can be very perceptive, too, and more than a little paranoid.) I often hear from friends and neighbors who "would like to help" that they are sure the widowed person's close friends and family are in some kind of inner circle and stick around and support the widow. Sometimes, the closest people feel the most threatened or fearful. Widowed people describe their communities "disappearing" around them after the casseroles end. It's not universal, but in the U.S. and Canada, the rearranged rolodex is THE most common complaint by far.

Well, it underlies the most common complaint: people acting awkward and saying stupid things. But the lists of "what not to say" don't help.

I, for one, do not want to encourage people to be frightened of someone who has lost a partner. Many widowed people (not most) know that stupid things are not intended to hurt them, but they feel pretty damn alone when they hear "He's in a better place," or "At least you had a chance to say goodbye." (Let alone, "did he have life insurance?")

So why did I make the "Shit People Say to Widows" video? Because it does unite us as a community, because I thought it was a chance to see the topic through each other's eyes for 3 minutes, and because it was fun as hell and funnier than.

Back to the topic: SAY HIS NAME. I felt I couldn't blog in an honest way about it because I was a pseudonymous blogger.  (Maybe I overthink things a little? RILLY?) Plus, the tips are really part of another project that isn't public yet. :-) Now I have done enough for the widowed community that I have a name, a real name, as myself: not just as Supa. (Though many people call me Supa anyway.)


So I'm "coming out." My name is Robin Moore (for the few of you who don't already know me). My first husband was Kevin MacDonald.


So, SAY HIS NAME, or her name, a lot. Say it a week after they died. Say it a month after they died, and a year, and two years, and ten years. Say it when you think of it. Say it in front of the widowed person, say it in front of their children. It's okay; it won't "remind" them of the loss. No one loses a life partner and just tries to forget it.

When people don't say his (or her) name, it makes the family feel like they are the only one who remembers their loved one. (I'm going to stop saying "or her" but I hope you know I mean widow OR widower and him OR her, and they didn't have to be married or straight to have a similar set of feelings or experiences after losing their partner. Do don't back out on some legality.)

Write his name in a card and you share a memory, whenever you think of it, even if it's years later (it will be less likely to get lost than it would have been right away!).  Write his name in a card for the anniversary of his death, or on his birthday, or on their anniversary, or call and say his name. Most people like to not be the only one remembering these dates, and they can't help but recall the dates because seasons keep changing and other dates keep appearing and you can always smell and feel when it is in the year in some vague way. Remembering is not an act of will, or from the brain. Time and life are all around us everywhere and if we are well, they are in our bodies.

So, share a photo if you find one while cleaning up. Share a song or a silly story on a holiday. Call, email, or write a real note. Even if you have been out of touch in a while. Even if you USED to be scared of the widowed person.

As time goes by (and when I say "time," I am specifically talking about periods of more than five years), the traumas turn to memories, the sad memories become fond ones, many details get lost, and with enough time, the widowed person might even forget the date of their anniversary. That doesn't mean they will think it never happened; it will not remove the events of their life "before" from their life. And every experience will include the absence of that loved one, even if it not quite the first thing to come to mind. And no -- these memories do not threaten my new husband, any more than his ex-wife's name threatens me.

So, say his name. Show your friend that you remember him, too. He's not just a loss. He was a person and a very big part of your friend's life for a pretty long time. He didn't just disappear when he died (though it can feel like a disappearance for a little surreal while). He changed the people he loved. (This is true in divorces, too. You can't just "un love" someone or "un live" the life you already shared. Let's be human, please!).

I'm sharing, above, the memorial quilt from my church, on which I embroidered his name during support group one night. I thought I was doing a terrible job, and I switched the thread midstream because I thought it came out too lumpy. It looks fine to me now. Every time I'm in church the quilt faces me. His name is among hundreds of other names. Each quilt records decades of love -- fathers, mothers, lovers, grandparents, and children. We have a whole quilt devoted to children who died, and it's comforting to see the range, from newborns to M.D.s.

HI MY name is Heart 1980 I lost my heart Gary  Aug 15 08 he was everything to me.Why cant I say his name?Around the holiday no one wants to say his name Why? I free like my family don't care .You know the saying out of site out of mine.Gary did exist to me and his family and he always will.Take care Heart 1980.

Robin thank you for this.  Yes it does seem like people don't want to say his/her name.

The only other thing that I would add... say his name... but also, don't pussy foot around what happened.  I didn't lose my husband - I know exactly where he is.  He died.  He's dead.  Don't try to pretend he's not.

Love this, Robin.  I wear a pendant that has Vern's photo on it. I think it makes some people uncomfortable ... but I really don't care. It gives me great comfort to wear it each day.  And I have often shared Donald Hackett's poem "Say His Name" because it is so important. Say His Name

Comment by Angie aka Woody's Girl on February 13, 2013 at 8:23pm
I've been a widow for 14 months. Last Monday was my husband's birthday and I called in sick and stayed home to be alone with my memories and to bake him his favorite coconut cake. I had to make a quick trip to the grocery store and whenever anyone donated a dollar to the American Heart Assoc. they would announce over the loudspeaker 'Jane (or whoever's name it was) just
donated a dollar to the American Heart Association. When it came time for me to check out I donated a dollar and they asked me to write my name on a heart shaped card. I did and then over the loudspeaker I heard the sweetest words .... Woody and Angie just donated a dollar .... almost took my breath away but I walked out of the store with a big smile on my face. I love his name and love your advice.