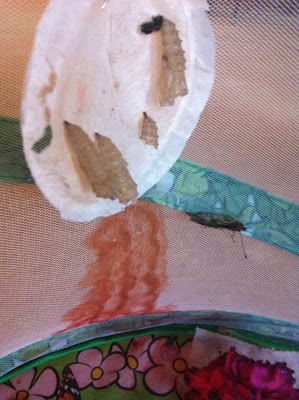 We LOVE to use the butterfly when we talk about people dying or people being transformed in huge ways. But nobody talks about the bloody goop that's part of the process of metamorphosis.

Because, I guess, it's pretty yucky.

On the face of it, if you look at the big salient bits, it's a nice image: caterpillar becomes butterfly. MAGIC. NATURE. Faith. We have lots of explanations.

So the living person is transformed into -- so much more beautiful! -- a soul. And the person who's being transformed -- hoorah! gets some rest time inside their chrysalis. We can use that. It's a good metaphor.

My daughter got a butterfly kit for her birthday, though. It was upsetting enough to me that she wanted to keep the butterflies indoors as pets, and didn't care that this would shorten their lives. Kids are cute, right? They have to learn their own lessons. OK, I chose not to fight that battle.

We watched most of it happen and it was some damn metaphor, really.

It was also gross. I have heard that the creature inside the chrysalis is a sort of chimeric soup... neither caterpillar nor butterfly. I tried, hard, not to visualize what it was doing in there, the pretty capsule that it wove from its own excretions. None of this, of course, was covered in the friendly brochure packed with the kit.

I knew my daughter was fascinated that seeing the wings emerge and dry would be something like seeing a human being born. But I had no idea the image would actually be fairly complete.

Because no one told me to expect the trail of bloody, mucus-y gook that would trail from the cocoons down the mesh of the butterfly habitat, leaving a brutal stain over the adorable pink flowers on its floor.

Then the little light went on. I thought, how like my life.

It's been six years and I'm not a butterfly yet. There's a long period of living as something indeterminate on the way to whatever it is that's new. Living through loss and reaching middle age gives me access to the drudgery of deep work on who I am and how I was formed, that I might have avoided if Gavin hadn't died. (Maybe. Probably not.)

I can't be afraid of things being messy. I shouldn't be surprised that it takes a long time to change... if I really pay attention, I know I'm pretty different than I was 20 years ago (really substantially) and that there are more than three stages of growth, that caterpillar-chrysalis-butterfly was never really MY story.

And I'm not in such a murk, really. I get things done, I have a good life, life is immeasurably easier than it was during infertility, Gavin's illness, single parenting, or forming a new relationship.

And that goop is perfectly natural, you know you will leave some things behind and you won't always be pretty.  It's not a bad thing to be fascinated with it or to be pissed that the brochure didn't give you the whole story. You have to live with ambiguity, with muck and darkness. And someday, you will even fly, drink from flowers, and rest on dewy leaves, your true colors unfurled in the sunlight.

At least, if a scientifically-inclined 8-year-old doesn't insist on keeping you in the guest room for all 3 weeks that remain of your life.

Epilogue: After a fair amount of motherly nagging, my daughter agreed to let the last three butterflies "smell the air outdoors" from inside the habitat, and eventually gave two their freedom. (They probably got a few days.)

Comment by Rebirth.Tanya (Tanya) on September 29, 2012 at 6:40pm
Love this Supa- I stopped by to thank you for your post on the 11th and was immediately drawn in- of course by the leftover goop that I too know so well lol. Thanks for thinking of me- and for also giving me insight on the butterfly garden I was thinking of getting the girls- now I know what to expect. ;)
love to you and yours... <3

I love this, Supa.  What a beautiful way to express what we are all going through.  Hugs to you Sweet Lady and to you daughter as well.