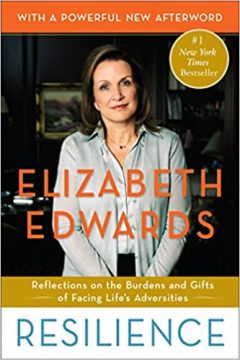 She’s one of the most beloved political figures in the country, and on the surface, seems to have led a charmed life. In many ways, she has. Beautiful family. Thriving career. Supportive friendship. Loving marriage. But she’s no stranger to adversity. Many know of the strength she had shown after her son, Wade, was killed in a freak car accident when he was only sixteen years old. She would exhibit this remarkable grace and courage again when the very private matter of her husband’s infidelity became public fodder. And her own life has been on the line. Days before the 2004 presidential election—when her husband John was running for vice president—she was diagnosed with breast cancer. After rounds of surgery, chemotherapy, and radiation the cancer went away—only to reoccur in 2007.

While on the campaign trail, Elizabeth met many others who have had to contend with serious adversity in their lives, and in Resilience, she draws on their experiences as well as her own, crafting an unsentimental and ultimately inspirational meditation on the gifts we can find among life’s biggest challenges. This short, powerful, pocket-sized inspirational book makes an ideal gift for anyone dealing with difficulties in their life, who can find peace in knowing they are not alone, and promise that things can get better.